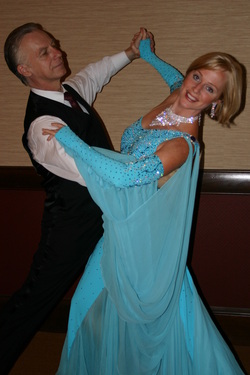 Allison has studied dance for over 15 years.  She started with Swing and Latin, which is where she found her first love: Salsa.  Shortly after, she moved to Miami to immerse herself in Latin culture.  The music, the dancing, the pure joy of it all helped form Allison's dream: to inspire the world to dance.
To reach the largest audience, Allison wanted to explore making movies.  She moved back to her home state, Kentucky, to study acting.  Not wanting to stop dancing, she took all the available dance classes while getting her B.A. in Theater.  This is when she fell in love with Modern and African dance.
After graduating, Allison moved to Los Angeles.  While studying tap, jazz, and more Latin dancing, she was booked in a Latin dance video, a rock video, and an independent musical.  Things were looking good until a family tragedy pulled Allison home.
Back in Kentucky, Allison continued studying, this time in the Ballroom arena.  She quickly became an instructor and began performing and choreographing professionally.  During these years, she met her husband and moved to Colorado.  There she continued to study, perform, and teach until she had her first child.  Now, the fortunate mother of two, Allison continues to chase her dream so she can lead by example.
Her travels and experiences have allowed her to study with some of the top professionals in the world.  Her coaches have included Dancing with the Stars professionals, Blackpool finalists, and Latin Dance Champions, among others.  Allison strongly believes one should never stop learning - which is what makes her such a grateful, eternal student, and teacher.